Stephen Garner is Academic Dean and Senior Lecturer in Theology at Laidlaw College. He teaches primarily in the area of practical and contextual theology, and his research focuses upon theology in dialogue with science, technology and new media, as well religion, media and popular culture. His current research projects include: theological ethics and social media; angels in popular culture; theological education and digital technology; and video games and spiritual formation. His most recent book (co-authored with Heidi Campbell) is Networked Theology: Negotiating Faith in Digital Culture (2016). Stephen is married to Kim with four children and they worship at Massey Presbyterian Church. 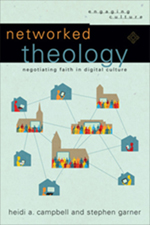 “Lament in an Age of New Media” in Spiritual Complaint, edited by Miriam J. Bier and Tim Bulkeley, 228-45. Eugene, OR: Pickwick Publications.

“Transhumanism and Christian Social Concern.” Journal of Evolution and Technology 14, no.2. 29-43.

"13 Reasons Why: A Theologian Reflects." In The Sturt Lectures: A conference for dialogue between Counselling and Theology, Laidlaw College, Christchurch, NZ, 29 September 2017.

"Are You My Neighbor? Theology, Networks, and Encounters with God and Others." In Theology and Communications: THEOCOM15. San Clara University, C.A., 2015.

“Whale Rider or the Passion of the Christ? Lessons from Aotearoa-New Zealand in teaching religion and media with local and global voices”. 7th International Conference on Religion, Media and Culture, Toronto, Canada. 9-13 August 2010.

Other Publications and Presentations

Malpas, Phillipa, Warren Brookbanks and Stephen Garner. "Euthanasia: Should It Be Legalized in New Zealand?" Ingenio: The University of Auckland Alumni Magazine2013, 10-11.

“The posthuman in popular and academic cultures”, Theology and the Natural Sciences in Aotearoa (TANSA) symposium on Christian faith and Postmodernity in Auckland, New Zealand (2011).

“Who do you say I am? Digital authenticity, ethics and community”, 2009 Digital Faith Symposium at the University of Auckland. (5 September 2009)

“Should We Have a Theological Perspective on Technology?” sPanz: Spanning Presbyterians in Aotearoa New Zealand, September 2007, 2.

"Voices from the Technological Borderlands." In Voices of the Virtual World: Participative Technology & the Ecclesial Revolution, edited by Leonard Hjalmarson and John La Grou, 61-67: Wikiklesia Press, 2007.